Not one of the new series Kromm and PK have been hinting strongly about, Peter V. Dell’Orto’s newest oeuvre will be very much welcomed by Dungeon Fantasy players and other GURPS fans alike. It’s close in style and content to Dungeon Fantasy Monsters 1, but whereas the former volume had a lot of unique, original and lesser-known monsters, the current one deals to a large degree with classic ones. The title is right on the money and if a monster is not connected to myths, it’s sure to have some magical slant to it (actually the mythic monsters are also magical). 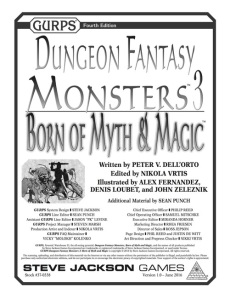 As all my other reviews this one will be rated according to meat (rules, stats, game mechanics), cheese (setting, characters, story), sauce (form, writing, style, art) and generic nutritional substance (universal nature, adaptability). At the end you find a weighted average of those components and a value score that also takes into account price per page.

Dungeon Fantasy Monsters 3 follows the format established in DFM1: Each of the 16 monsters presented gets a page with game stats, description, GM advice and (in most cases) possible variants. Only the notoriously hard to run Doppelgangers get two pages. Apart from the introduction, there’s a short section explaining how to read the monster stats, two pages on meta-traits not in GURPS Basic (two of them brand-new) and new prefixes. There’s nothing especially surprising about all that.

The same can be said of the mythical monsters. Basilisk, Cockatrice, Doppelganger, Dryad, Harpy, Manticore, Medusa and Phoenix are old standbys in fantasy games, but it’s good to see full game stats for all of these. It would have been nice to see non-western myths represented, but you really can’t argue about the sheer iconic value of this selection. Some less expected monsters like Giant Ant, Lava Lizard, Phase Serpent, Rock Troll and Shadow Warrior to provide variety. But my favourites are the weirdos, of course: Living Pit, Octopus Blossom and Rot Worm are surely going to provide hours of fun for your players – or painful seconds of death more precisely. A special mention goes out for the myrmecoleon – an ant with a lion’s head from medieval mythology.

As would be expected from a Dungeon Fantasy supplement, the diet is leaning towards the meat side of things, though not as much as the recent Power Items. We get the expanded stat block that has become the standard DF notation and notes how everything works in play (read: combat). There are some boxes on special combat rules, where warranted – note the large number of gaze or sight attacks. Variant round this off. We get four different Basilisks (not combinable), two different Cockatrices (not combinable), three types of ants (workers, soldiers, queens) combinable with six variants (some of which can be combined for even more fun), Sirens as variant Harpies, scalable Living Pits, five variants of Manticores (free to mix and match), six Medusa variants (stackable), six Octopus Blossoms (some of them combinable), rules for making variant Phase Critters, five different kinds of phoenix (only one burns), guidelines on using prefixes on Rot Worms and rules for making different Shadow Beings (Shadow Warriors already can be modified by race).

The two new meta-traits (Amorphous Stone and Plant) are very useful, the prefixes (Flying, Furious, Holy and Phase) a bit less so with Phase being the most interesting one. Rules for fighting monsters without looking at them, for attacks out of phase, falling into monsters and a decapitation Achilles Heel for Unkillable 1  round off the rules-side of things. All in all, the book comes through for all those who cherish stats and rules.

Despite the rules-heavy outlook of the book, there are also roleplaying hints for all creatures, though those are often on the short side of things and sometimes solely confided to tactics and whether they are able and willing to negotiate. The exception is a very good treatment of what to replace with your Doppelganger adversary.

Cheese score: 4 (none of these monsters are giving up any milk)

Except for a rather boring composite of interior art on the title page, the inside art is quite good. While it’s certainly not up to DFM1 level, it’s a clear step up from most GURPS offerings nowadays and gives off a cool medieval bestiary vibe too. Peter V. Dell’Orto also manages to capture the tongue-in-cheekiness of Kromm’s Dungeon Fantasy.  While he doesn’t quite reach the master in all cases, I laughed out aloud at least once and chuckled many times. Whispering tree gossips, pit-fighting, death by weasel, chibitrice and the dreaded leaping ethereal dungeon shark are among the funnier concepts I read in RPG supplements lately.

I did manage to find three spelling mistakes, which is abysmal for a GURPS supplement, but still stellar for regular RPG products. I’m not marking the book down for that.

Sauce score: 7 (pity there wasn’t a chuckling variant for the Cockatrice)

The monsters presented are optimised for fairly high-powered fantasy, but many wouldn’t look too shabby in a Monster Hunters campaign or any urban fantasy with a couple of tweaks. Indeed, there is a nice range of power levels present in this volume. Prefixes and especially the new meta traits are pretty dang universal. I can’t believe we didn’t have the Plant one before now. The extra rules are also useful for fighting any weird foes and will come handy in many unrealistic campaign settings.

On the whole, there is only one true criticism I have for this book: It’s too short. Even another four pages with non-western monsters would have been nice, but with this topic I could have seen a full eighty-page treatment – though that would have necessarily overlapped with 3rd Edition’s Monsters. A pity most titles on the GURPS wishlist are for 30 pages or less.

Total score: 7.45 (my favourite title for the year so far, barely edging out After the End 1)
Total score is composed of a weighted average of Meat (50%), Cheese (15%), Sauce (20%) and Generic Nutritional Substance (15%). This is a meat-oriented book. A “cheesy” setting- or drama-orientied book would turn the percentages for cheese and meat around.

Value score: 5.725 (just at the right length to get a positive price rating)
Value Score is composed of the average of Total and Price.